If the NSA has you worried enough about your phone and computer web cam, then THREAT VECTOR by Tom Clancy / Mark Greany will make you realize that maybe you should be more concerned with our giant trading partner to the east. This novel has China not only acting out on a host of territorial ambitions with military moves in the South China Sea, but also unleashing an off-the-books, devastating cyber attack led by a mysterious operative named Center…

After taste testing a few Chinese beer options and being disappointed/sickened, I returned to the beer which is a pilsner standard in China – the venerable Tsingtao, founded by German brewmasters. Yes, I suppose Chinese kock-offs may be okay for clothes in WalMart or U.S. nuclear technology, but it just doesn’t work for beer. Apparently Jack Ryan, Jr. knows this, as he chooses to down a Tsingtao in Hong Kong during an unsanctioned operation. And that’s just the kind of thing you expect the President’s son to be doing.

At 835 pages, you may need a case of Tsingtao to get through the door-stopping THREAT VECTOR. Or at least the one-pint bottle option (as pictured) will get you through several of the 79 chapters. 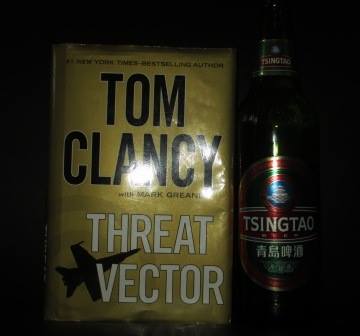