Book-Beer Pairing #2: THE GODS OF GUILT and Stone Levitation Ale

Lincoln Lawyer Mickey Haller is back for another adventure in L.A., this time a case involving a dead prostitute, the DEA, and a pimp claiming he was wrongly accused. Case preparation stress, dealing with two ex-wives, and a strained relationship with his daughter Hayley often makes Haller turn to the sauce. In one scene he’s offered wine and says “I almost asked if she had something stronger but thought better of it.” Then Mickey ends up sharing sake with this lady in another scene. Nice move.

Haller does keep (unspecified) beer in the fridge, and my belief is he’d reach for something robust. Levitation Ale by Stone Brewery, Escondido, is an excellent SoCal pick that I highly recommend for this book. I won’t be able to help with a sake recommendation, but maybe someone else can post one… 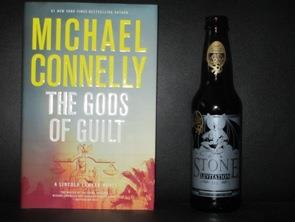