I’ve been an ASICS guy since high school. The shoes have always seemed to fit best and never cause a blister. But over the last decade, I’ve found that some of their models are hit and miss. I’m not sure if it has to do with their shoe quality, my age, or my current ignorance in finding a good match. It doesn’t have to do with price—I’ve bought moderate to expensive ASICS models.

When I found an ASICS model I really liked (such as the running/trail hybrid Kahana), I bought several pairs at once for my closet stockpile. 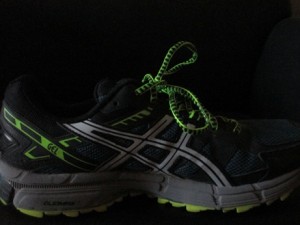 My first step away from ASICS was when I found them to be inadequate for trail running and particularly racing. In Arizona, sharp rocks protrude in parts of the running trails. You do your best to avoid them, but sometimes it’s hard to—especially when you’re going fast and have toxic sweat running into your eyes. If one of those rock spear-tips hits that nerve at the base of my big toe, it causes pain and numbness for a good half-hour.

Altra has a trail-running shoe called the Lone Peak with a rock plate inside the toe box. It works great. I can deliberately trot across sharp rocks as though I were dashing across dandelions in a grassy field. My only knock on Altra is that they boast a “zero-drop” i.e. level sole, but the amount of cushioning is not to my overall liking. The Altras did help me run some fast times, and I generally recommend them. 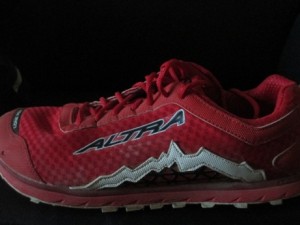 By the way, when I bought these Lone Peaks, they only had red. I did sometimes feel like Ronald McDonald.

My shoe conundrum evolved to the impossible. I wanted a well-cushioned shoe, that felt fast, and was great for trail running.

Enter the Hoka One One.

At the gym, I saw a guy wearing these shoes with a crazy amount of cushion. I mean, if the members of KISS were going to go running, they’d want shoes like these. The guy told me he loved the Hokas. I did my ridiculous amount of internet research. People raved, especially about the trail models. 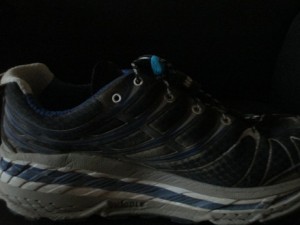 I put them on for my first run. It was going to be a five to six miler.

They were the best shoes I ever remember putting on my feet.

In the first mile, I felt like a rocket. By the second mile, my pace was still about thirty seconds under what I intended. I felt awesome, so I continued to happily cruise along.

Then at about mile four, I got a strange pain in my left hamstring. Not high hamstring pain, which is the normal place I get it, but low hamstring pain. I slowed down. Luckily, I was on my return route.

Then pain in my right hamstring. Again, low pain—not high. Identical to my other hamstring.

Weird. I walked the rest of the way home. And I kept walking in those shoes for the next three months.

My theory was, the insane amount of cushion changed my natural gait enough that my hamstrings were not equipped for it. I usually had no problem running in more minimalist shoes to race or do speedwork, and this shoe was the polar opposite.

I started back slow again in my ASICS again on the track. If my hamstrings began to twinge, I stepped off the track and would go straight to my car. The hamstrings felt back to normal after a month or two of increasing the mileage. I ran a decent 10K with no hamstring problem. Whew.

My Hokas became an awesome pair of walking and standing shoes, the best damn pair I’ve ever had. I concluded that the shoes were, in fact, awesome, but I was obviously not worthy enough for them.

Then I got that nasty, mutant flu that was going around in mid-December. I didn’t run until the end of January, and when I came back, my lumbering mass made my knees and various connective tissues ache. The ASICS were no longer doing the job.

Because I was starting at square one again, I decided to try the Hokas once more and sloooooowly increase my mileage.

I’m now up to 6-7 miles in the Hokas. The shoe is amazing on asphalt, on the trail, and on my tile kitchen floor. This Stinson model is incredible on steep trail downhills. The tread is perfect. I thought the extra “height” might feel awkward out on a trail, but I don’t even notice.

The only thing left to do with my Hokas is race. We’ll see if they can get me through the summer and back competing.

Goodbye, ASICS. I have a new partnership with this strange-looking, but beautiful shoe.