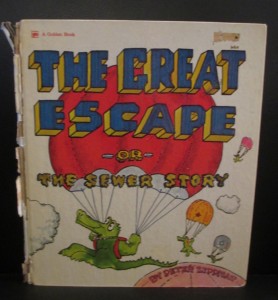 Escape is one of the strongest themes in literature and film, especially in the thriller genre. I’m a sucker for prison breaks, daring rescues, and even the slow, methodical pursuit of feeedom if well-plotted. It’s a suspense and action hook that never grows old. Add mental or emotional escape to a physical escape (an advantage a book has over a movie in expressing), and it creates a deep, multi-pronged experience for the reader.

Long before I read The Count of Monte Cristo (in 5th grade, I think) and reveled in the escape of Edmond Dantes from the Chateau d’If, I had a different favorite. This brilliant children’s book by Peter Lippman tells the story of a baby alligator, Silas, taken from Florida by a tourist family and flushed down the toilet in New York City. In the sewer, Silas meets a community of alligators who band together and escape using their wits. The story is wonderful, and the illustrations still make me smile. Oh, and there are nine new copies of this masterpiece out there on Amazon starting at a mere $458. I’m sure my copy above would fetch $4.58 due to its poor condition and “bonus” illustrations / annotations inside. But this was back when markers were magic markers, you know.

On a side note, I’ve always wondered if the 1980 movie Alligator was born from Lippman’s idea and took a much darker route with it…

For those unsavory people expecting me to pair a children’s book with a beer, I’m not going to let you down. I recommend the time-tested birch beer from Pennsylvania Dutch. If you’ve never heard of birch beer, I can’t help you.

When I think about how the plot of Measure of Danger evolved, it’s clear I had some early influences. The Great Escape, featuring McQueen, Garner, Bronson, and a slew of other actor favorites, is even more powerful because we know the story is true. 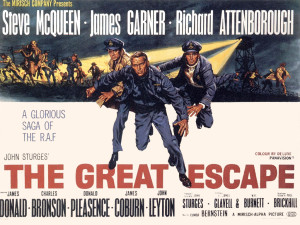