Pyramid Lake has a plot setup that’s fairly simple. We meet the main character, Trevor Lennox, an ego-maniacal DARPA scientist working at the high-security Pyramid Lake complex who drops more F-bombs than a B-2 Spirit. We learn that his current project is a talking supercomputer that can read facial microexpressions. But then the murder and gore start, and we find the entire Pyramid Lake facility is not what it seems. As the bodies pile up and Lennox becomes more unhinged, he tries to figure out what’s going on…and could his beloved computer (Frankenstein) be behind it?

I first thought Pyramid Outburst IPA was a shoo-in for this book, since Lennox’s unpredictable outbursts kept me turning the pages. But Outburst was soundly defeated in the playoffs by the taste of Hop Box Imperial IPA by the Joseph James Brewing Company of Henderson, Nevada. Don’t let the can fool you (it is available in bottle, just not available to me) – this is an outstanding brew and the most appropriate selection for this book. Lennox is kind of a cheap shot (he keeps a mouthpiece in his pocket!) so maybe a can is the better choice if you don’t want that beer bottle used against you… 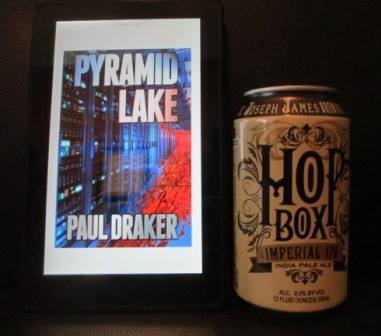