I’ve never been to Thailand, hadn’t read any novels about Thailand, and I don’t remember ever having a Thai beer. So when a friend suggested I read COCKROACHES, by Norwegian crime fiction writer Jo Nesbo, I took the bait. The novel features the alcoholic Norwegian police detective Harry Hole as he’s dispatched to Thailand. Hole is to assist in the investigation of the Norwegian Ambassador’s death after he’s found with a knife in his back in a Bangkok brothel. The Norwegian government thinks that Hole’s reputation will help them sweep this matter under the rug. They thought wrong.

Since one of Thailand’s venerable beer brands, Singha, by Boon Rawd Brewery was mentioned in the book, I thought it would be the natural beer pairing. As stated on its web site – Boon Rawd Brewery became the official purveyor to the Royal Court of Thailand with the gracious appointment on 25 October 1939, and granted the use of the Kingdom’s Garuda [official emblem] as well as the words “By Royal Permission.”

But I was mistaken. In a surprise twist, worthy of several encountered in COCKROACHES, Chang beer by Thai Beverage edged out Singha in flavor. Further research yielded that Chang also acquired and produces Mekhong, a molasses and rice liquor made famous (in Arizona anyway) by The Refreshment’s classic, “Mekong” – still sung today by Roger Clyne & The Peacemakers.

You won’t go wrong with Chang or Singha paired with COCKROACHES, and they were both clear winners over Pukhet Beer. No pun intended. 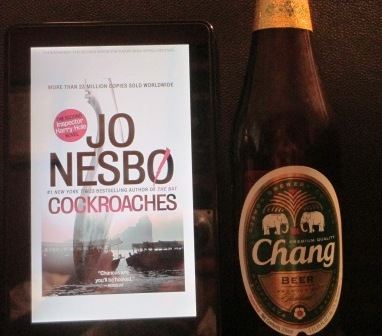